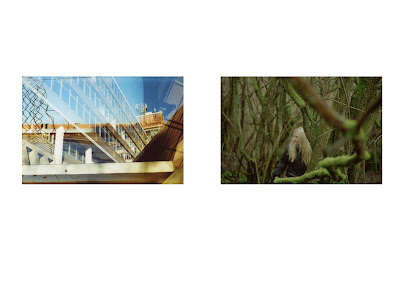 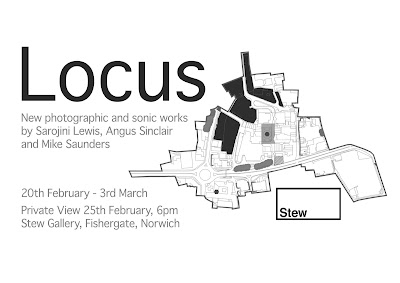 Locus, a collection of new photographic and sonic works opens on 20th February at Stew Gallery, Fishergate, Norwich. Local artists Angus Sinclair and Mike Saunders recent work explores themes of flux and memory, using the referential forms of photography and field recordings to document Anglia Square shopping centre in its current state of flux.
Sinclair states that his photographs aim ‘to evoke a sense of place which exists independently of the artist, in the unoccupied perspective where the artist-narrator’s presence is covert. His hand is only noticeable by its absence; he is a ghost who releases the shutter.’
Both Sinclair and Saunders have acquired all their equipment for the show from retail outlets in Anglia Square and the proximity of Stew gallery to the Square creates a tension between memory, recording and the imagined as Saunders explains: ‘the locus of sound plays back and forth, amplifying itself with the real-time noise of the outside surroundings, creating a conversation between the place and its recorded doppelganger. The fact that the recording is played through loudspeakers from the Square – old radios, hifis, and car speakers bought mainly from the many charity shops – ties the sound and the way it is physically presented back to the square.’
The show also features new photographic work from Sarojini Lewis, who explores the genetic as well as geographic definition of the show’s title Locus: ‘the essential idea I communicate with my work is an emotion consisting of two sides. On one side it is the human desire of being a part of a natural environment, on the other side it is the feeling of being out of context in the same environment.’
Lewis, who has recently been spending her time between Israel, Scotland and Holland, has also been exploring ideas of family lineage: ‘I started my research in Scotland. Motivated by family research and feelings that appear while studying old documents, I travelled through the Scottish natural parks and woods. Another rural perspective is created in Israel and the countries that are close to this country and have a border in between them. Again I was inspired by the fact that my grandfather once was a spy in Palestine during the period of occupation by the British army with the operation called the Palestine Mandate. I travelled through the different dry looking environments that characterise the landscape of Israel, Egypt and Jordan.’
The show will run until 3rd March and admission is free.
at February 09, 2011 No comments: